The building was named for former Congressman Harold L. Runnels. Runnels was born in Dallas in 1924. He graduated from Woodrow Wilson High School in Dallas and attended Cameron State Agricultural College in Lawton, Oklahoma. He worked for the FBI in Washington, D.C., until World War II, when he enlisted in the Army Air Corp. In 1950, Runnels moved to New Mexico and was owner of Runnels Mud Co. and Ronco Acidizing and Fracturing. He was elected state senator in 1960 and in 1970 became the congressman for the Second Congressional District.  He earned a reputation as the “Energy Expert” during his tenure. 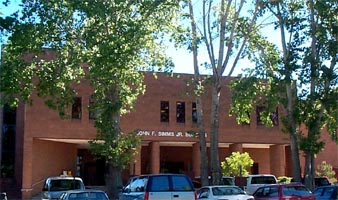 The building is named for John Field Simms Jr., born in 1916 in Albuquerque. He was a member of the New Mexico House of Representatives from 1947-1949. Simms was elected governor of New Mexico in 1954 at the age of 38. He was, at that time, the youngest person to be elected governor. He died in 1975.

The Simms Building serves as the headquarter for the Information Technology Department. Of the buildings maintained by the Facilities Management Division, it has the most extensive systems for back-up power and cooling supply.

Office of the Superintendent of Insurance Fraud Bureau

The building is named for late U.S. Sen. Joseph Montoya, who was born in 1915 in Sandoval County. In 1938, Montoya was elected to the New Mexico House of Representatives and in 1940, to the New Mexico Senate. He was elected lieutenant governor in 1946 and 1948 and elected to Congress in 1957. Montoya served as U.S. senator from 1964 to 1977. He died the following year.

The saddle that Montoya used in portraying Don Diego DeVargas in the 1950 Santa Fe Fiesta is displayed in the atrium of the building.

A bell from the USS New Mexico is displayed in the building.

The Lujan Building serves as the processing center for the state Department of Taxation and Revenue.

Department of Health - Bureau of Vital Records and Health Statistics

The building is named in honor of the dedicated public health nurses serving the citizens of the state. It formerly housed the New Mexico Human Services Department Field Office.

The vital records office is required by law to register, preserve, certify, analyze and publish the vital statistics of New Mexico. The state Board of Health created the Vital Statistics Division in 1919 shortly after establishing the Public Health Nurse Unit.

The building was purchased by the state in 1998 from the federal government. It was renovated and houses offices of the departments of Indian Affairs, Taxation and Revenue, and Energy, Minerals and Natural Resources.

In 2004, the building was named in honor of Wendell Chino, former president of the Mescalero Apache Nation and the National Congress of American Indians. He helped strengthen Indian self-determination in the 1960s and raised national awareness of Indian issues.