Gov. Michelle Lujan Grisham appointed John A. Garcia in October 2021 to serve as Cabinet secretary of the New Mexico Department of General Services.

Garcia served as tourism secretary and later economic development secretary under Gov. Gary Johnson. He also held leadership positions under Johnson with the Department of Cultural Affairs, Border Authority and State Fair.  Most recently, Garcia was executive vice president of the Home Builders Association of Central New Mexico. Prior to that, he headed the economic development offices for the city of Albuquerque and the University of New Mexico.

Garcia also has experience in the hospitality industry and has worked as a customer service consultant.

Garcia has a bachelor’s degree from the Anderson School of Management at the University of New Mexico. He lives in Albuquerque. 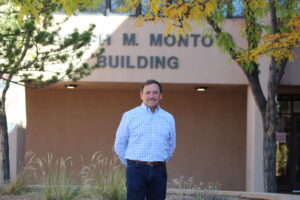 Welcome to our website. Whether you are a state employee looking for information about your health benefits, a contractor seeking details on how to do business with the state or a representative of a New Mexico government agency who needs state printing services, we want to make sure you find the information you need.

Our statutory mission is to achieve the highest level of government efficiency through consolidation of resources and improved operating procedures.
GSD must and will achieve the greatest return on your investment in state government by prioritizing projects and working to achieve the greatest possible effectiveness for New Mexico citizens.
GSD provides seven key services to other state agencies:  Printing; Purchasing; Risk Management (acting as the state’s insurer and health care manager); Facilities Management (lease management and major capital construction, maintenance, utilities, and security of state owned facilities); and, Transportation Services (surplus property, vehicle and aircraft fleet operations).

We want to hear from you!

The General Services Department is committed to providing fast and friendly responses to all inquiries, suggestions and comments that the Office of the Secretary receives from the public and state entities. Please let us know how we can better serve you by Clicking here to submit your comments and filling out an online comment form. Your request will be delivered directly to the Office of the Secretary for review and follow up.